Brno, the Czech Republic‘s second-largest city, has a population of nearly 381,000 people. It lies in the central part of Europe and within its two hundred-kilometre radius there are other important European capitals: Prague, Vienna and Bratislava. Brno is an administrative and cultural centre of the South Moravian Region.

The South Moravian capital perfectly combines history, modern architecture and culture. There are a lot of things to see, for example, the legendary Tugendhat Villa, the mysterious underground, the atomic bomb shelter for the chosen few, an infamous jail and the second-largest ossuary in Europe.

Czech out Brno for a Cheaper, Calmer City Break
The Guardian, September 2017

In the Integrated Public Transport System of the South Moravian Region (abbr. IDS JMK) are connected all the existing transport modes in the large part of the South Moravian Region as well as in its capital City of Brno. Under the same conditions, you can travel in local trains, regional buses and public city transport of Brno (trams, buses, trolleybuses). The most recent information on Brno's transportation system can be found on the official website www.idsjmk.cz.

You can get a full assortment of tickets, passes and coupons at the integrated railway stations, DPMB (Brno Public City Transit Co. Inc.) offices, strategically placed (outdoor) coin-op vending machines, newsstands, hotels and some shops. You can buy the most important single-ride ticket to cover your fare and luggage directly from the driver in all vehicles of city transport (lines 1 to 99). You pay extra for this convenience: The tickets sold by drivers are more expensive than ticket sold elsewhere. In buses numbered 100 to 999 it is possible to buy the full assortment of the one-way tickets and without the surcharge.

A transfer ticket allows you to change all tram, bus and trolleybus lines in Brno as you like. However, the validation of these tickets is 60 minutes only, but it gives you enough time for getting to the hotel. The price of transfer tickets is CZK 25.

Brno-Tuřany Airport is an airport near Brno, Czech Republic. It is located about 10 km from the Brno center.

There is regular bus line E76 from Brno center to Brno Airport (in Czech: Letiště Brno – Tuřany) and in the opposite direction. The bus goes from Brno Hlavní nádraží (Main railway station), passing through the Brno main bus terminal (Zvonařka stop) and ending at the Brno airport. The bus goes from 5 a.m. till 12:30 p.m. every 20 minutes. Between 11:00 p.m. and 05:00 a.m., there is bus number N89 in operation. The regular fare in 25 CZK (1 EUR) for adults.

Another option is taking a taxi. In front of the terminal, there is CITY TAXI parking. The ride to the center should cost around 400 CZK (15 EUR) and lasts 20 minutes.

When taking a taxi, make sure the taxi is equipped with a permanently installed yellow roof lamp with the TAXI sign in black letters. The registration number, company name and price list including the base rate, the rate per kilometer and one-minute-waiting rate must be displayed on both front doors of the cab. These prices must correspond with the prices set on the meter in the cab. Customers are recommended to order a taxi with non-stop dispatching offices where the information on fares is available in advance.

Please use one of the recommended companies: 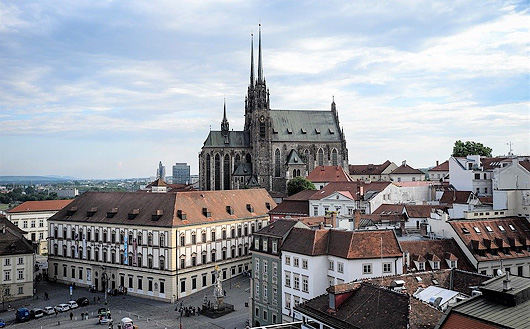 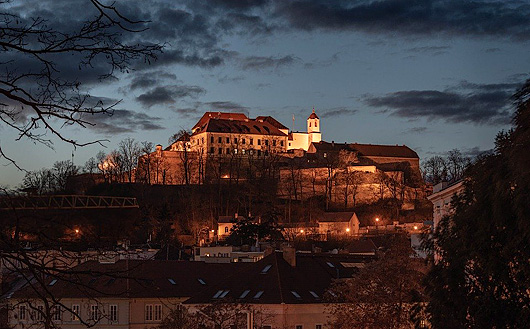